Old School Leadership Model | On the Brink of Extinction

A couple of days back, during a meeting with a client, we discussed a significant difference in leadership styles that are often overlooked but knocking on your front door. Allow me to set the scene.

“Leader A” knows the way, as does “Leader B.” Both of these individuals oversee ten or more directors that lead a vast majority of the people in the company; let’s say 80% of the employees report to these ten or so directors, and both of our Leaders (A&B) are charged with the task of leading these 10. So it’s easy to see from the outside that the roles of Leaders A & B are to serve and develop the ten directors they oversee.

Nonetheless, a problem arises when a couple of directors in entirely different locations have similar issues with their production— thus highlighting an internal problem that the directors need to address immediately.

Both Leaders A & B got the job done. However, leader A’s trip cost less money and time but left a much more negative wake in their approach as a whole. Leader A missed a critical opportunity to build a relationship of deeper trust with the site director, gain collaborative insight at a grassroots level and raise morale with the entire team.

Leader B’s trip cost money and a bit more time, but the wake left from that interaction will provide a literal 10-fold on the initial investment. The site director was reminded they are cared for, believed in, and trusted, not to mention they were challenged to be better rather than simply do better. Leader B made it clear that there is a shared purpose when he came in and listened first, asked questions, listened again, and was naturally invited into helping the site director make changes.

As organization-leaders, let us not grow weary or confused about where our time and energy must be spent because, without the right people in the right place, your organization will fail. What you witnessed from Leader A has worked in the past, but times are changing.  That method is not working near as well or for as long as it did. DRYVE Leadership is willing to bet that that “old school” way of leadership will be extinct in less than ten years, not to mention the questionable wake that it leaves.

Take note. When you choose to engage your team with mutual respect and invite them into meaningful dialogue, shared purpose happens. This approach will cultivate your company’s culture from the inside out.

We aren’t throwing stones because it’s not about which leader you have been. However, the question still looms…Which leader will you be?

At DRYVE Leadership Group, we understand the necessity of this leadership shift; our system will transform your culture from the inside out. Let’s engage in some meaningful dialogue. Contact us today! 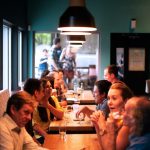 The Gift of Showing Up FullyCommunication, Leadership